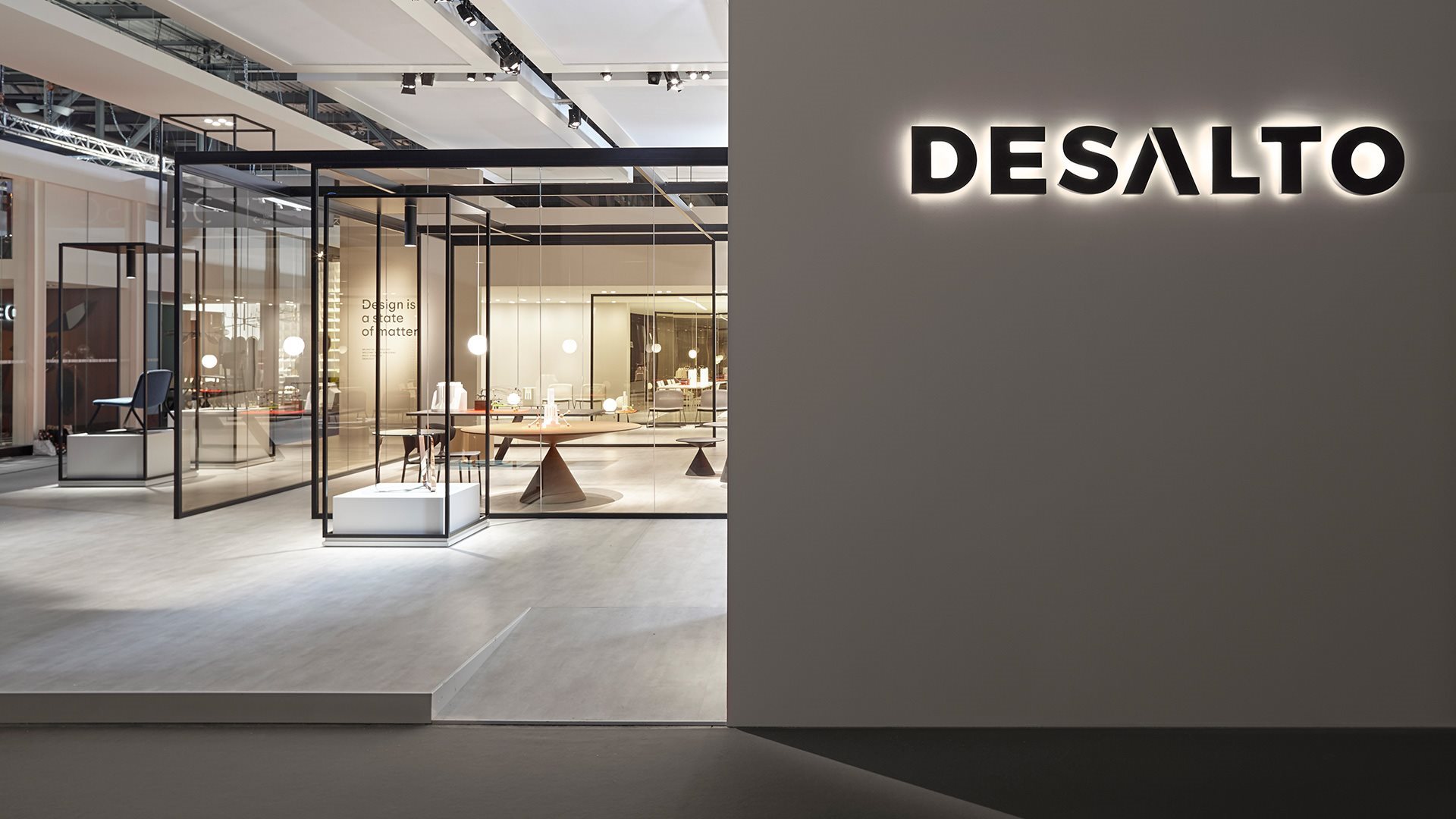 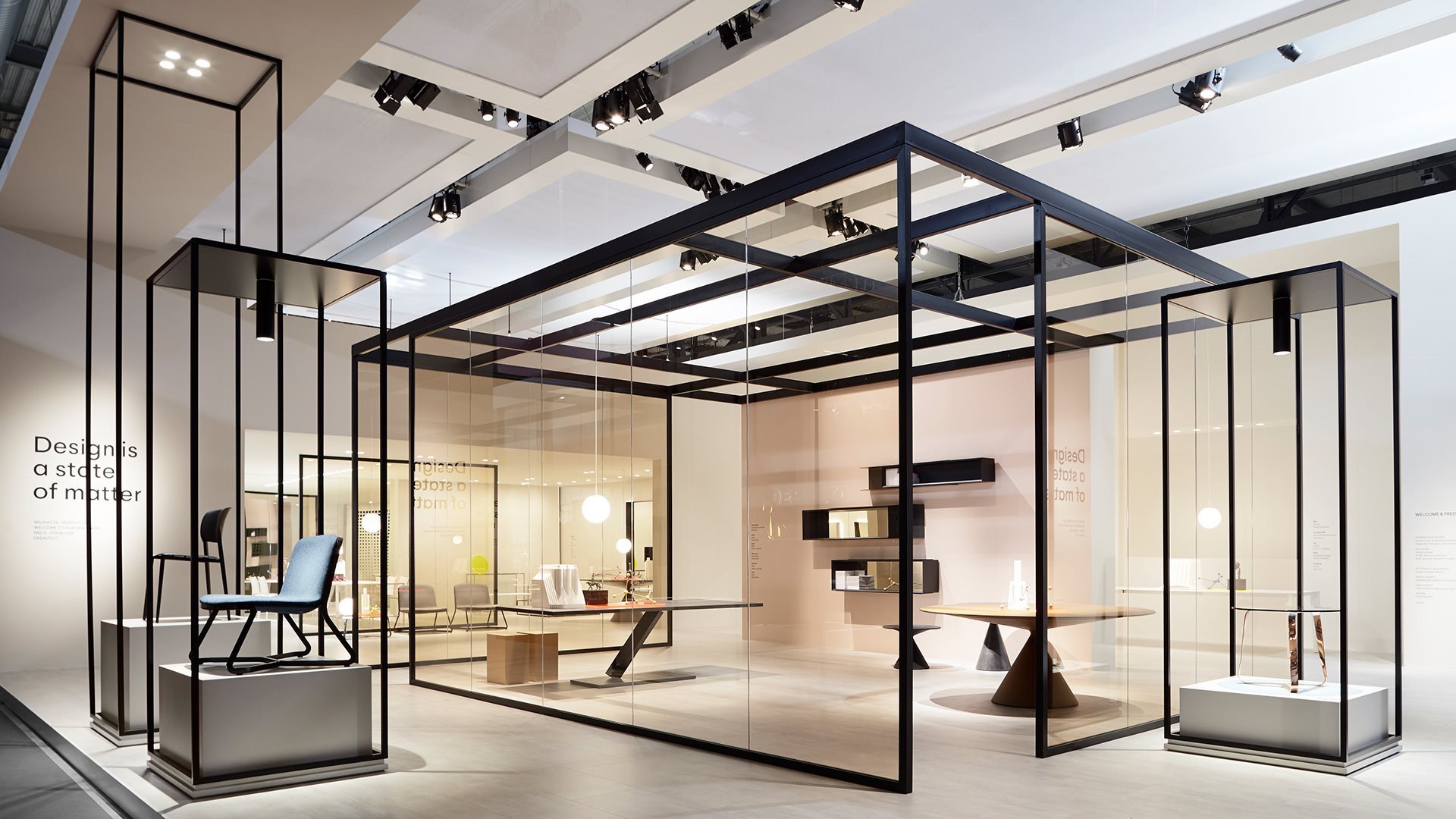 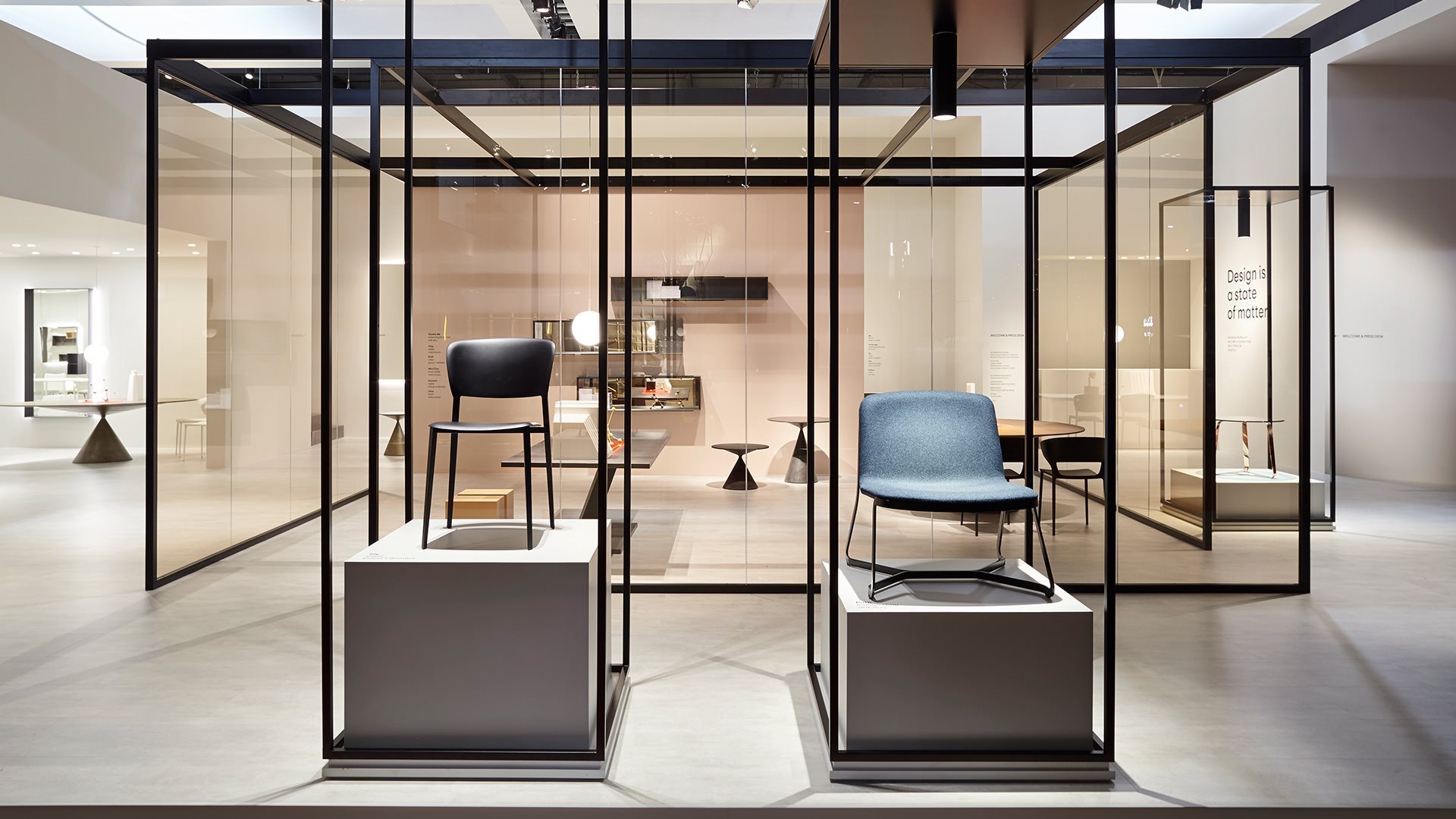 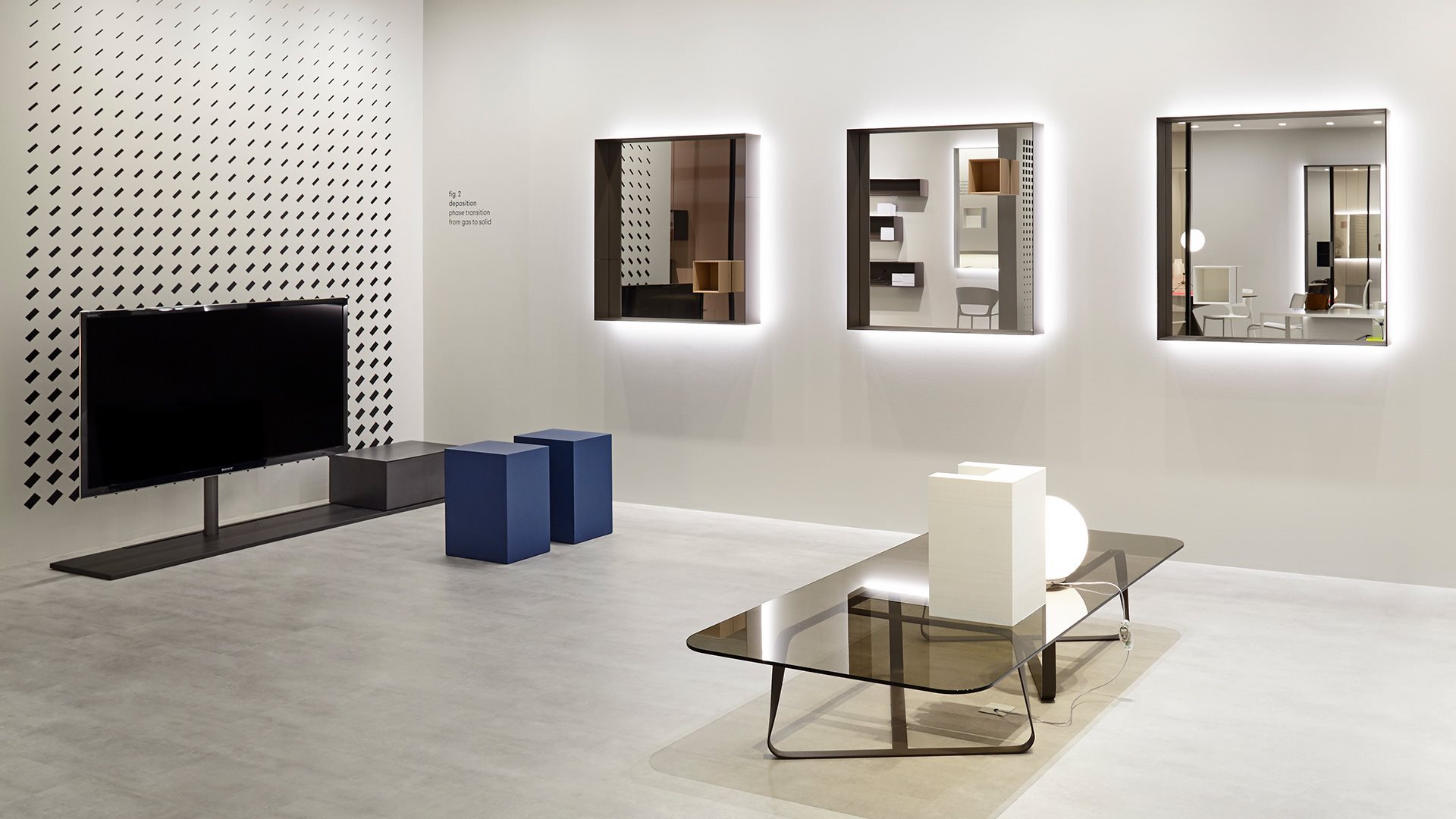 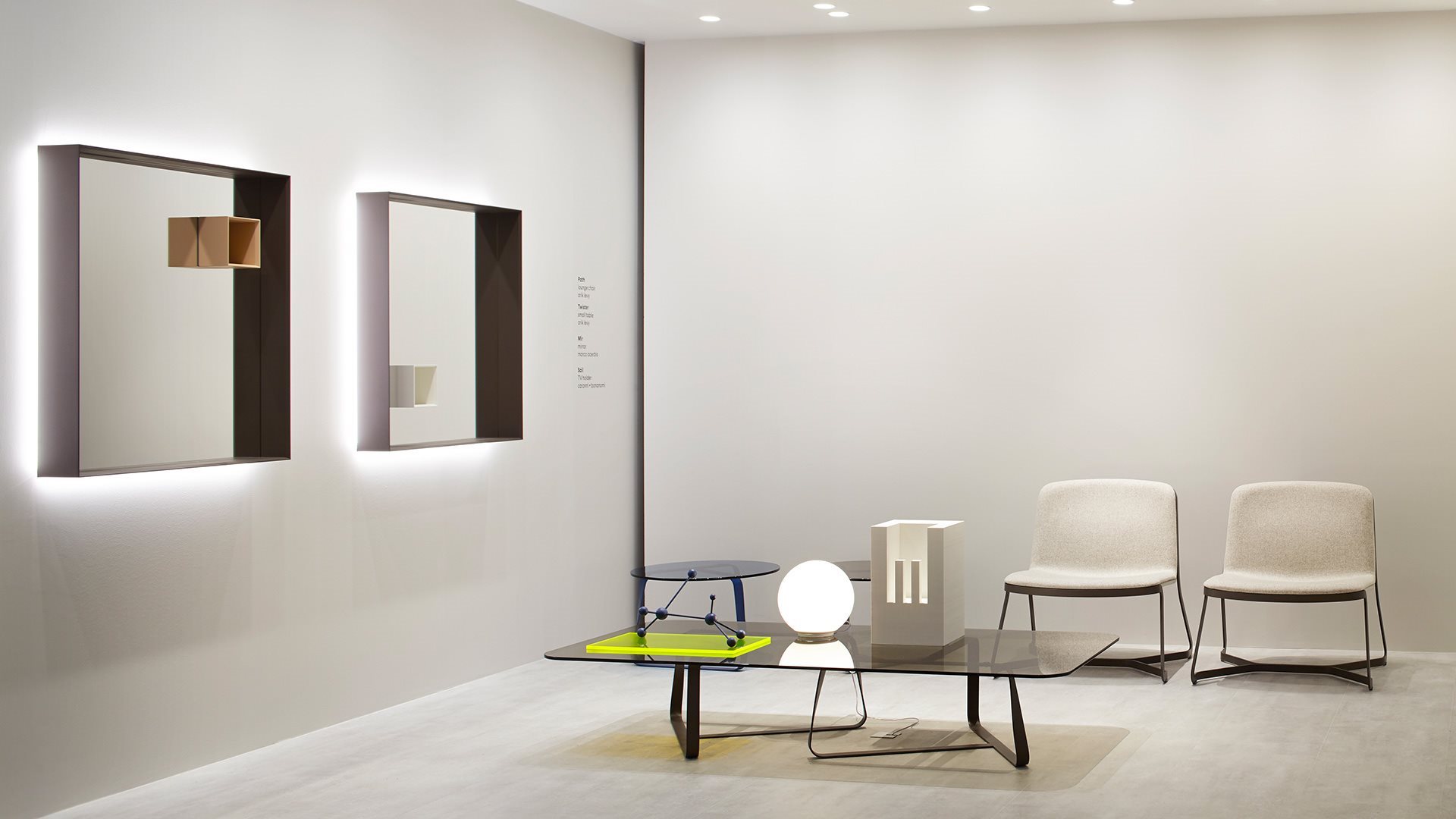 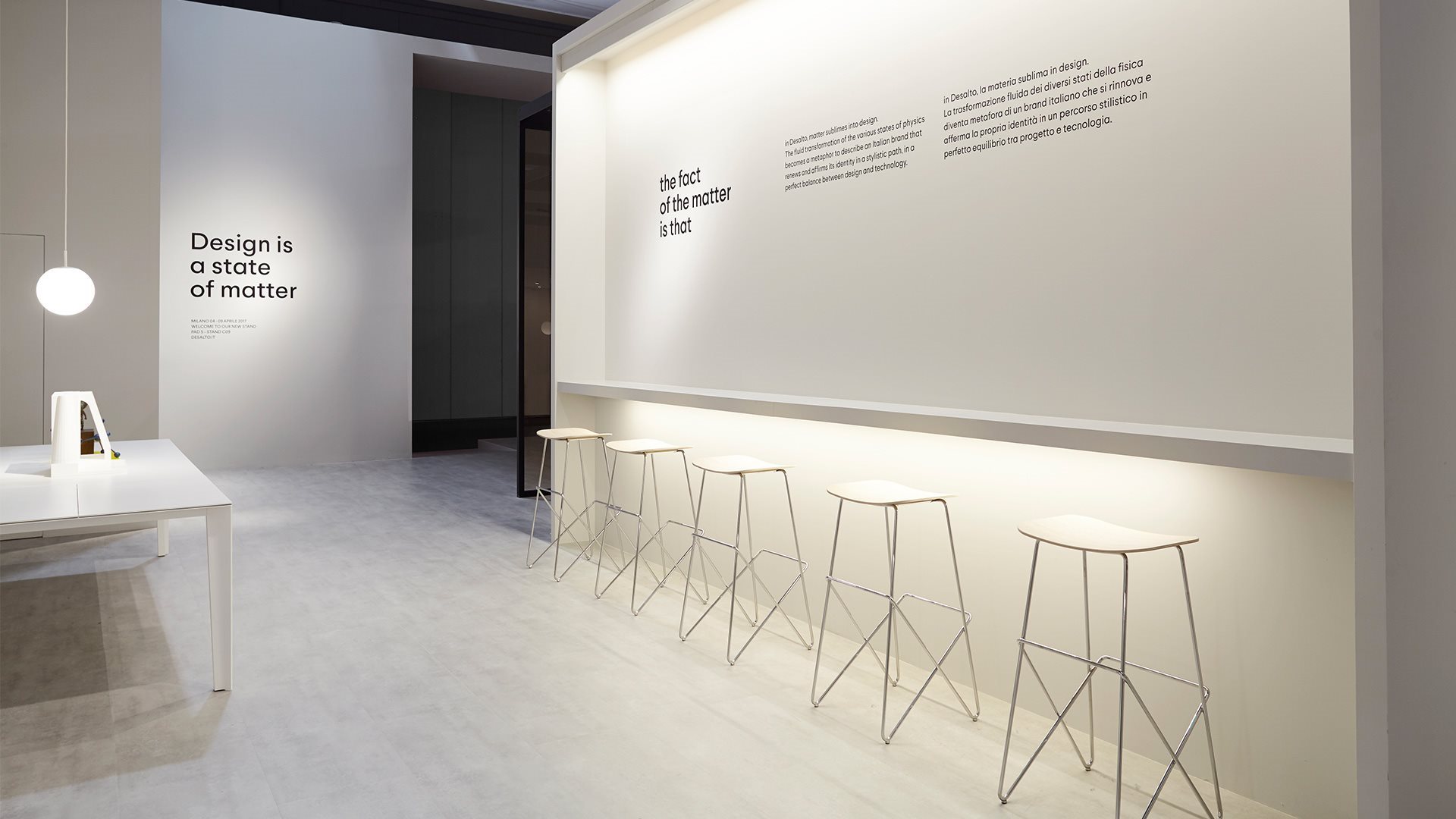 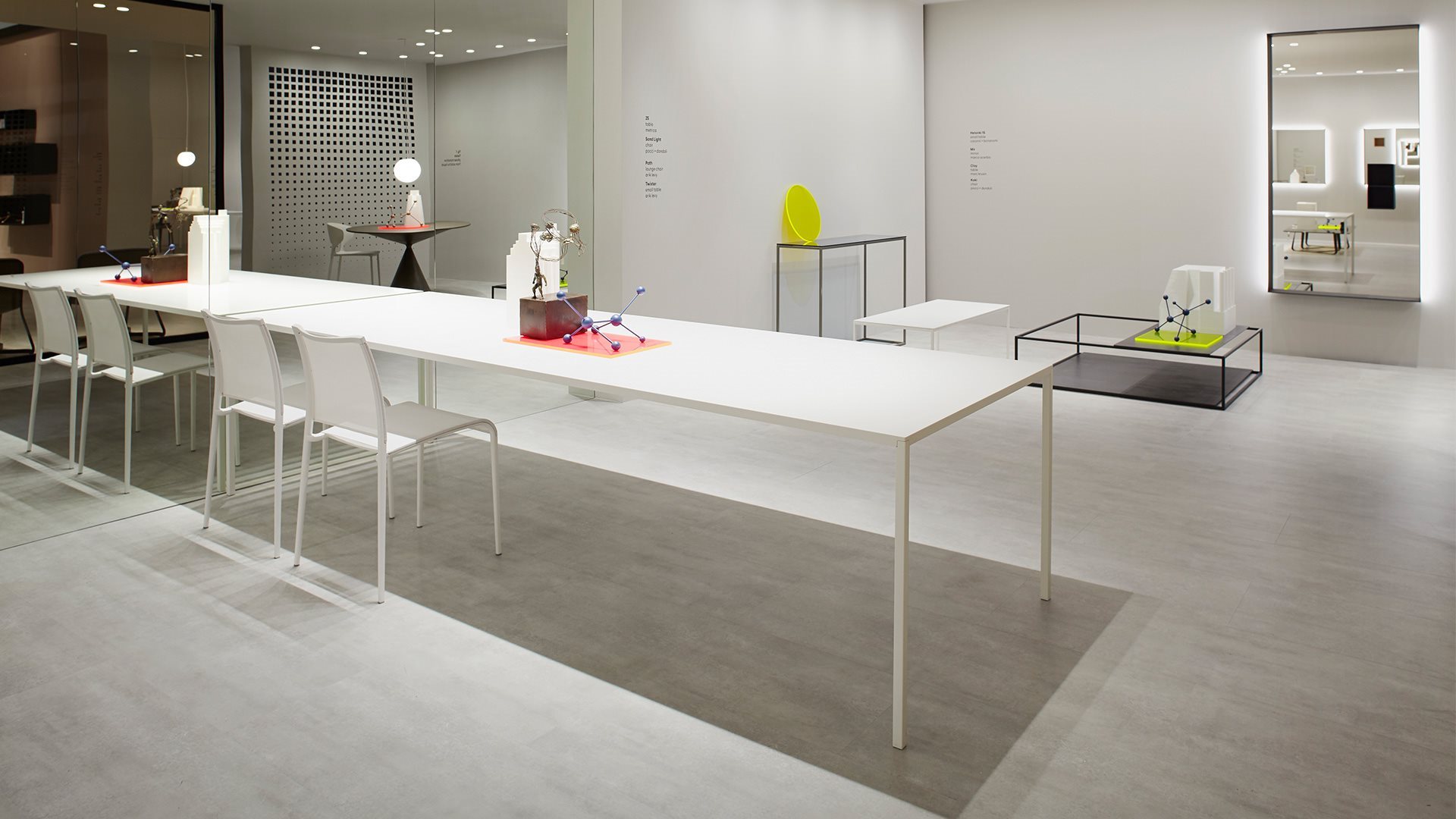 Desalto will be attending Milan’s design week with a renewed concept, coherent with the new mood - DESIGN IS A STATE OF MATTER - choosing scientific iconography as a metaphor for its new direction. Design becomes a state of matter at its purest peak, in a visual communication path where nothing is lost but everything simply transforms.Today at Desalto we breathe and feel the change: matter becomes a tale, in a fluid transformation through the various physical states - such is the alchemy of the new identity of a brand that renews its corporate identity.

The stand, in its new position in Hall 5, is located on the main corridor with a high visibility factor. The concept by Chiara Boselli - Desalto’s Creative Director - is generated by the urge to renew and transform that, as a metamorphosis, lead to describe the product with a scientific approach : the space becomes a museum.The entire project has been entrusted to the architect Alessandra Dalloli, part of the all- female team in charge of Desalto’s change of image, coherently with the concept of the imminent new catalogue - DESIGN IS A STATE OF MATTER - stating the guide lines for the company’s visual communication for the years to come.The entire stand is simple, entirely coloured in grey, creating a neutral space where the glass caskets’ black metallic structure draw the geometry and define the volumes.

In the central part of the stand is a large transparent glass theca, slightly pink-tinted, as pink softens the ambiance. The transparency of this large object enables to enjoy the product also from the outside. The glass panes are framed with black lacquered iron profiles, which draw a geometry in the homogenous space.Around this precious box are smaller transparent caskets , very simple and conceptual, displaying some of the new products. These are formed by a pedestal and a structure made out of black lacquered iron profiles, resulting in a rigorous exhibit object, that frames and emphasizes the product.The exhibiting space is partially divided into two different heights, with a mezzanine area, beneath which a tricky combination of mirror deceives the visitor’s eye, doubling and exasperating the dimension of the “25” table, the proportion of which is simply magical.Just like a museum, the light valorises the objects displayed : direct beams enrich the products within the caskets.

On the ground floor, beneath the mezzanine, the illumination reflected by the walls integrates the geometrical rhythm of the lamps hanging from the ceiling.The sophisticated styling by Alessandra Monti gives additional character to the presentation.
Share